Cristyn Zloza, who is nationally certified and multiple award winning, earned a place on the National Ranked list that is tracked and tabulated by Groom Team USA, just released after this latest grooming competition in Dallas, Texas. 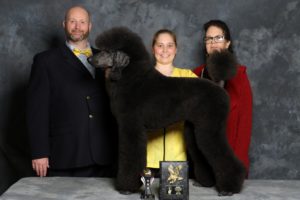 Wheaton Il, – November 23, 2015 – Spotted Paw Shop is excited and proud to announce that their nationally certified, multiple award winning head groomer Cristyn Zloza has taken a step closer toward her goal of grooming for Groom Team USA. This past week, after the conclusion of the Pet Pro Classic in Dallas, Texas, the points were tabulated and Groom Team USA released their updated national ranking of groomers. Cristyn who has placed 17 times in the top 3, and has a group placement, has made the list for the first time being ranked 38th in the United Sates. The points earned came from this most recent competition where Cristyn took a group placement in Large Poodle with Channel the Standard Poodle. Some of her other placements include multiple 1st place finishes in Mixed Salon with Rocky the LabraDoodle. Multiple 1st and 2nd place finishes in All-Other Purebreds with Cash and Brandy the Bichon Frise. Also multiple 1st, 2nd and 3rd place finishes in Poodle with Chanel, Aurora, and Sophera. These placements were earned in national grooming competitions hosted by Barkleigh, NDGAA, and the ISCC.

“It is exciting to start moving onto the same stage as those I have looked up to, those whom have mentored me, and those who played an integral part in motivating me to start competitive grooming.” Cristyn stated upon learning of her placement, she went on to add, “I hope that as I continue to compete and improve, I will be able to help and mentor other up and coming groomers in the same way my mentors have helped me.”

Groom Team USA, who celebrated their 25th year of competition this year by taking the Silver Medal at the World Team Grooming Championship this past October in Florence, Italy. The team is formed every 2 years to compete in the International Grooming Championship, regarded as the “Olympics of Professional Pet Stylists”, by groomers from all over the United States. Groom Team USA is strictly a Non-profit team, which encourages professional pet stylists to maximize their grooming skills and education while representing the United States in international competitions. (www.groomteamusa.org)

Spotted Paw goes, above and beyond, the typical groom shop while making sure that the quality of the hair style is to your satisfaction. Using all natural pet shampoos, moisturizers and conditioners that are specially formulate to meet your pets’ needs. In addition we carry a selection of healthy and organic food brands. Covering from dry food, to raw, to treats, we have or can order what you are looking for. At Spotted Paw we take pride in knowing that you enjoy the beauty as much as your beloved pet does. (www.spottedpawsalon.com)